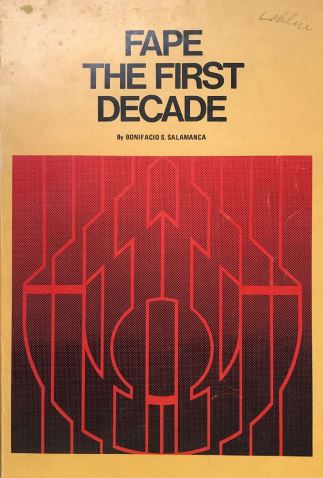 FAPE: An Idea Becomes a Reality

The Fund for Assistance to Private Education was a part of the Special Fund for Education set aside by the American government in 1963 from the surplus funds authorized by the War Damage Act of 1962. The latter, in turn, was actually a supplement to the Philippine Rehabilitation Act of 1946, which authorized the payment of private claims to damages sustained during the Second World War.

Plans for the Special Fund

At the vanguard of this movement were three prominent Ateneo Jesuits, namely: Reverends John W. McCarron, Pacifico A. Ortiz, and Thomas R. Fitzpatrick. Each performed distinct, although at times overlapping, roles: Fr. McCarron’s was to convince the American government to accept the basic principle that private education in the Philippines was entitled to a share of the Special Fund; Fr. Ortiz’s role was primarily that of mobilizing the private schools and institutionalizing their efforts to tap the Special Fund; while Fr. Fitzpatrick’s special concern was the search for the best possible formula that would assure optimum earnings of the Fund earmarked for assistance to private education.

Fr. McCarron left for the United States in December, 1963, but he returned after more than half a year, apparently without getting any commitment from the American government that private education would be considered in any disposition of the Special Fund. He was at least relieved to find out that during his absence, Fr. Ortiz had already mobilized COCOPEA. In September, 1965, Fr. McCarron would make a second extended trip to the United States in behalf of private education. This time, he returned with the unofficial assurance by the U.S. Government that it would only be willing to set aside one-half of the Special Fund for private education in the Philippines if the Philippine government proposed it.

President Marcos had scarcely settled down in Malacanang when he took concrete steps to make full use of the Special Fund. Realizing the potential uses of the Fund for urgent educational requirements, he pursued negotiations with the American government with more vigor and determination than his predecessor. He next created the Special Fund for Education Committee “to establish guidelines and to review project proposals screened by the Department of Education and to consult with representatives of the United States government on the projects to be financed under the Fund.”

Towards the Formulation of the FAPE Project Proposal

The private schools under the collective leadership of COCOPEA took the first steps to obtain a portion of the Special Fund. The guiding spirit behind all this was Reverend Fr. Pacifico A. Ortiz, S.J. then Regent of the Ateneo de Manila Graduate School, later Ateneo’s second native President.

With a view to generating public support, and thus influencing government thinking on the uses of the Special Fund, a two-day conference on March 12-13, 1964 on the theme “Nation-Building and the Private Schools” [was organized]. One of the principal speakers at the conference was Dr. Sotero H. Laurel, President of Lyceum of the Philippines and at that time also of PACU. In a forceful speech, he zeroed in on the Special Fund for Education:

There is, however, a way whereby the government should be able to pursue a policy of fairness towards private schools besides a policy that is truly positive… [It] may adopt, for example, a carefully studied program of incentives and assistance such as other countries have done and are doing with increasing scope… Direct grants-in-aid and subsidies from funds that will hereafter become available may be extended to deserving schools… A subsidy fund, especially administered, could also be generated for research and other worthwhile projects of private schools. In this connection, the government would do well to avail of the $40,000,000 surplus Ward Damage Fund…

The private schools had now publicly served notice that they expected a share of the Special Fund.

COCOPEA would try once more to seek an assignment of $10 million, in a revised proposal entitled, “A National Program for Upgrading Private Education in the Philippines.” Dr. Corpuz, head of the Secretariat assisting the Education Assistance Committee and Undersecretary of Education, endorsed the proposal and recommended its approval.

As the project proposal had been favorably endorsed by Dr. Corpuz, COCOPEA officials had every reason to assume that they would hear something good. Their optimism soon gave way to anxiety. The remaining months of 1966 passed without any news.

In 1967, the Department of Education Project Proposal entitled, “Government Assistance to Private Education,” was submitted to the U.S. Panel. This brief but trenchantly written document was unmistakably a shorter version of the COCOPEA proposal.

The Department of Education proposed to utilize the P24 million as a revolving trust fund for loans to the private schools on a long-term, low interest basis “for investment in physical facilities, equipment and other capital expenditures.” Any remaining funds not committed to loans were to be invested in such a manner as to maximize earnings.

The combined income from loans and investments was to be set aside for “faculty training and development, in the form of fellowships and scholarships, research grants, faculty incentives and inter-institutional cooperative projects.” A Committee of Three, to be composed of the Secretary of Education, or his representative, as Chairman, and a representative each from the NEC and the private schools as members, was to be created to establish priorities for the utilization of the Fund’s earnings as well as to process project proposals for funding.

Elsewhere in the text of the project proposal, the following was written:

The P24 million pesos revolving fund and the earnings derived from it shall constitute the initial step of the government in its effort to establish constructive relations with private education in general.

COCOPEA officers were ready with a long letter to President Marcos three days after their meeting with Dr. Corpuz. The association presidents then waited for a reply, or better yet an audience with the President. Months after, COCOPEA was called to a hurriedly meeting in Malacanang on so short a notice, only to be told by President Marcos that is was “too late to consider [COCOPEA’s] suggested revision, since the final proposal had already been turned over to the panels.”

Negotiations and consultations had the effect of delaying the signing of the Fund for Assistance to Private Education (FAPE) Project Agreement until June 11, 1968. But these only show that FAPE was not the exclusive brainchild of COCOPEA or our government, much less the American government. It was the product of collaborative thinking among men who had the same idea, men who were willing to reconcile their views as to how best to attain their common objective, men who knew how to compromise, to give and take, and to avoid lapsing into rigidity, so that the idea could become a reality.

The American Note of June 11, 1068 required of the Philippine government the simultaneous creation of the Private Education Assistance Committee (PEAC) and constitution of the Fund as a permanent trust. Government lawyers drafted the executive order and copies were furnished COCOPEA officials for their reactions. They took strong exception to limiting the choice of an investment and financial management consultant to government institutions, preferring that this be left instead to PEAC’s discretion; this would be more in harmony with the flexible intent of the Project Agreement. They also insisted that PEAC be the “Trustee,” and not just the “Administrator,” of the Fund.

The executive order would be refined to incorporate most of COCOPEA’s comments and suggestions (as had been done in the case of the Project Agreement) and issued by President Marcos as Executive Order No. 156 on November 5, 1968.

(from FAPE: The First Decade by Bonifacio S. Salamanca, 1981)